WHO NEEDS A CALIFORNIA BOATER CARD?

Get Your Boater Card

Very nice course. I completed it in one sitting and I learned a ton about boat safety. Thank you.

Not quite as comprehensive as I had expected. I had done a lot of reading of other marine safety literature and found this course did not cover topics in as much detail. Also would like to have been able to review the questions I got wrong.

The video and audio features in the course greatly helped me in passing the boater exam, along with the useful infographic summaries at the end of each module. However, I was unable to click and download a pdf copy of some of the infographics; and I was also unable to enter my postal code in Singapore (with 6 digits) as doing so lead to an invalid postal code message popping up.

william B
Posted 1 week ago

I felt somewhat confident going into the boaters test so overall I would recommend this site to anyone wanting to receive their boaters licence.

I understand why there is a delay or time requirement for each lesson but found it a bit frustrating as in some cases seems excessive. Also some lessons are blank, it would be useful to have a statement about why or to remove the extra slides/pages

Course material was complete and very informative. It was a huge help in completing the test successfully.

Seroj B
Posted 3 weeks ago

Read The Reviews
start the course

Purchase more than one boating course, test and card and save up to 35%. Perfect for family, friends and workmates, we include everything your crew needs to get their Official California Boater Card.

“There’s nothing better than leaving the work week in our wake.”

The PADDLERsmart! course is perfect for anyone participating in paddle sports including canoeing, kayaking, and stand-up paddleboarding. Whether you’ve been paddling for years or just getting started, you’ll learn everything you need to stay safe on the water.


$24.95 value. Get it free when you purchase your BOATsmart! Course. 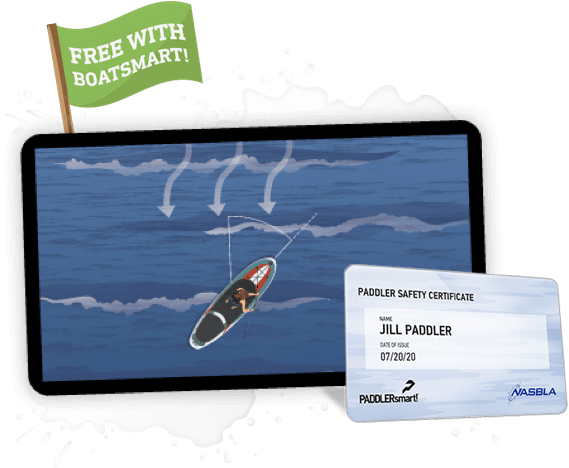 From anywhere, on any device at any time.

Our animated and narrated Boating Safety Course is perfect for all ages. Study from your Smartphone, Tablet or Desktop and switch between devices at any time. BOATsmart! automatically tracks your progress so you can study at your own pace.

Get Your Official Boater Education Card

Print your Certificate of Completion immediately

Get My Boater Card

YOU’RE IN THE
CAPTAIN’S SEAT

The BOATsmart! California State Approved Boating Safety Course is 100% narrated, brilliantly illustrated and includes animated lessons that keep it fun and help you retain the knowledge you need to boat safely. The course includes everything you need to pass the test and obtain your official California Boater Card.

We’ve made our course available accross all platforms and devices. Start it on your mobile, progress through modules on your tablet and finish it on your desktop.

Study at your
own pace

Study at your own pace and we’ll automatically track your progress. Take your time, login in to your personalized course dashboard and pick up where you left off.

Perfect for all ages
& skill levels

Designed by online learning professionals, subject matter experts and real boaters, our course is built for all ages and abilities, including 8 yrs old and up.

Not sure what to expect? Try the Boating License Practice Test for free and test your knowledge.
Try the California boating safety practice test now.

What is a California Boater Card?

The California Boater Card is proof that a boater has successfully passed the California Boating Safety Test. Beginning on Jan 1, 2018, the state of California began phasing in a law that requires boaters to obtain and carry a boater card. The law is being phased in over 8 years.

Is the California Boater Card the same as a Boating License?

A California Boater Card is official proof that you have successfully completed a California state-approved boating safety course. Boaters commonly refer to the Boater Card as a California boating license however, this is incorrect. Unlike a license, a Boater Card does not expire and doesn’t need to be renewed.

Who needs a California Boater Card?

Who is exempt from having to obtain a California Boater Card?

What is the fine for not having the Card?

Boaters caught without a Boater Card may receive a fine of up to $100 for the first conviction, $250 for the second conviction and $500 for the third.

How do I get a California Boater Card?

How do I prepare for the California Boater Safety Test?

Will my California Boater Card ever expire?

No. Your California Boater Card will be good for life. But don’t be a stranger – BOATsmart! offers free refresher lessons that will help you keep your boating knowledge up to date! California’s boating laws may change over time. Make sure you’re in the know.

How do I replace my Boater Card?

You can easily purchase a replacement California Boater Card from the California State Parks Division of Boating and Waterways. The state of California charges a standard fee of $5.00 per replacement card.

Do I need a Driver’s License to operate a boat in California?

Do I need a Boater Card for all types of boats?

Depending on your age, the California Boater Card will be required for all operators of any motorized vessel, including Personal Watercraft (PWCs) and Jet Skis, when operating on California waterways.

How long does the California Boater Course take?

The state of California requires that you spend a minimum of 3 hours studying the online course. The purchase of your BOATsmart! California Boating Safety Course includes unlimited lifetime access.

Is my California Boater Card valid in other states?

Yes. The California Boater Card is accepted in 40 states, which extend reciprocity. This means the BOATsmart! Course meets the National Standards established by NASBLA. This law applies to operators of motorized boats, but not in all states to operators of personal watercraft (PWCs). Always check the boating laws in the state you plan to visit prior to operating a boat or PWC there.

BOATsmart!® is North America’s Boating Educator, approved by the National Association of State Boating Law Administrators (NASBLA) and recognized by the US Coast Guard. We’ve been delivering award winning online boating courses since 2003 and have certified more than 650,000 boaters. BOATsmart! is accredited and approved by the California State Parks, Division of Boating & Waterways, to deliver the official California Boater Card Course and Boating Safety Test.

The official BOATsmart! California Boating Safety Course is approved by the California State Parks Division of Boating and Waterways, the National Association of State Boating Law Administrators (NASBLA) and recognized by the US Coast Guard.

BOATsmart! has provided online boating safety education across North America since 2013. Our courses are designed and developed by real boaters, subject matter experts and instructional design educators. We’ve certified more than 650,000 boaters online and are proud to be the choice of boaters from coast-to-coast.